Revelation 13:16 And he causes all, both small and great, and rich and poor, and free and slave, to be given a mark upon their right hand or upon their foreheads,

Revelation 13:17 and that no one should be able to buy or sell except he that has the mark or the name of the beast, or the number of his name.

Revelation 13:18 Here is wisdom! He who has understanding, let him calculate the number of the beast, for it is the number of a man, and his number is six hundred and sixty-six.

The foundation is laid, and the many prophecies are sure, however, the New World Order is also sure. Human nature has not changed for the globalists. If you want to be the tallest tree in the forest – you simply cut down all the other trees. Divide and Conquer; culture, history, deep-seated religious beliefs, racism, greed, ego, and the need for survival; as their Eugenics agenda of destroying earth’s entire echo system will collapse on them – and they will turn on each other in their need to survive with what is left of earth’s dwindling resources and life support systems. Globalists – wake up! Satan hates you and all mankind. Unless you really repent and quit letting him deceive you, you too, are on the Titanic and have hit the iceberg of history, prophecy, human nature, and Satan’s trap for you. Mankind’s only hope is Matthew 24:21-22.

Matthew 24:21 For then will be great distress, such as has not been since the beginning of the world until this time, no, nor ever shall be.

Matthew 24:22 And if those days were not shortened, no flesh would be saved, but for the sake of the chosen ones, those days shall be shortened.

Without His intervention, there is no hope for mankind. Man has written his history in his own blood. That is why only through the blood of the Messiah is there any hope at all. The Final Battle – Armageddon in the valley of Megiddo. 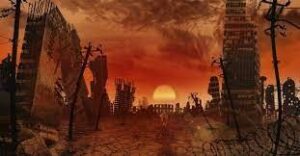 The time frame of the following Scriptures is the 7th trump when Messiah returns with His set-apart ones to establish His throne and rulership for His Kingdom on earth. That is why it says the kingdoms of this world have become the Kingdoms of Messiah. The return of Messiah spells the end of Satan’s kingdom and his rule as the “god” of this world.

II Corinthians 4:4 In whom the mighty one (god) of this age (world) has blinded the minds of the unbelieving, so that the enlightening of the Good News of the esteem of Messiah, who is the likeness of Elohim, does not shine on them.

Sorry, all of you sovereigns of the earth. Your reign is over! Messiah is the king of kings and master of masters. All the nations are gathered in the Valley of Megiddo to see who will reign supreme over the earth. All the nations will be enraged because the Messiah will prevail and destroy those who destroy the earth. This was not possible until now.